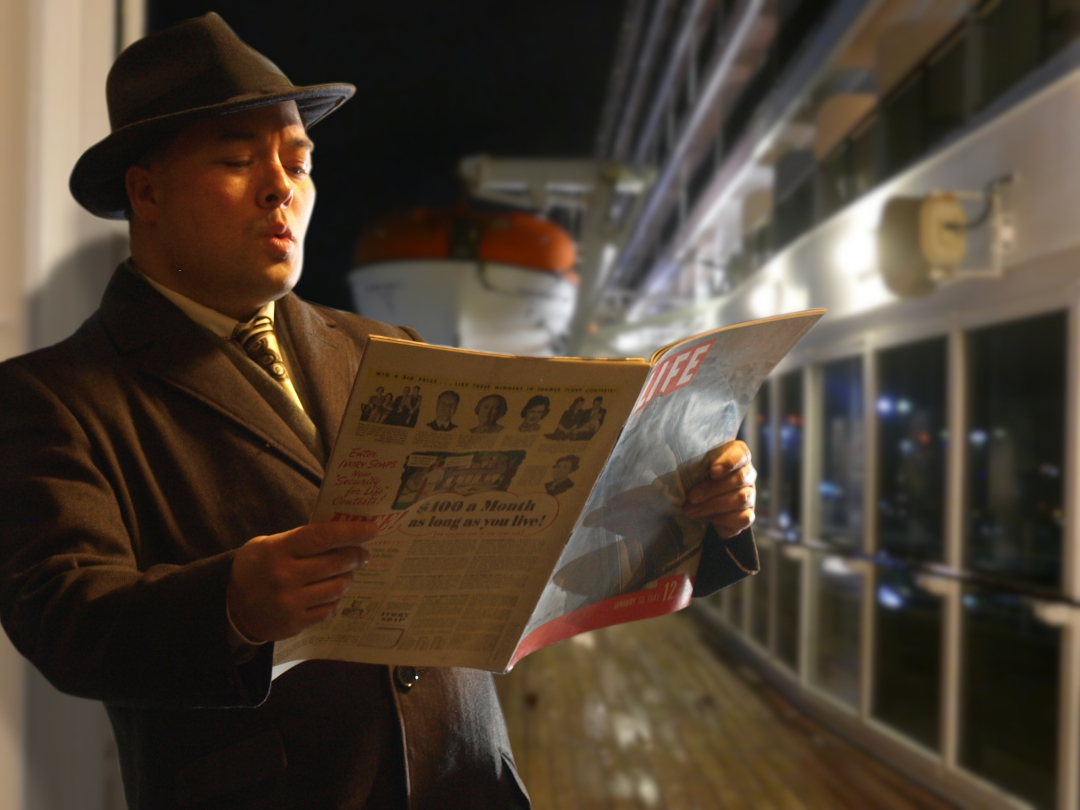 Just got back from the QM2! 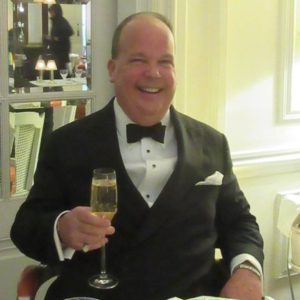 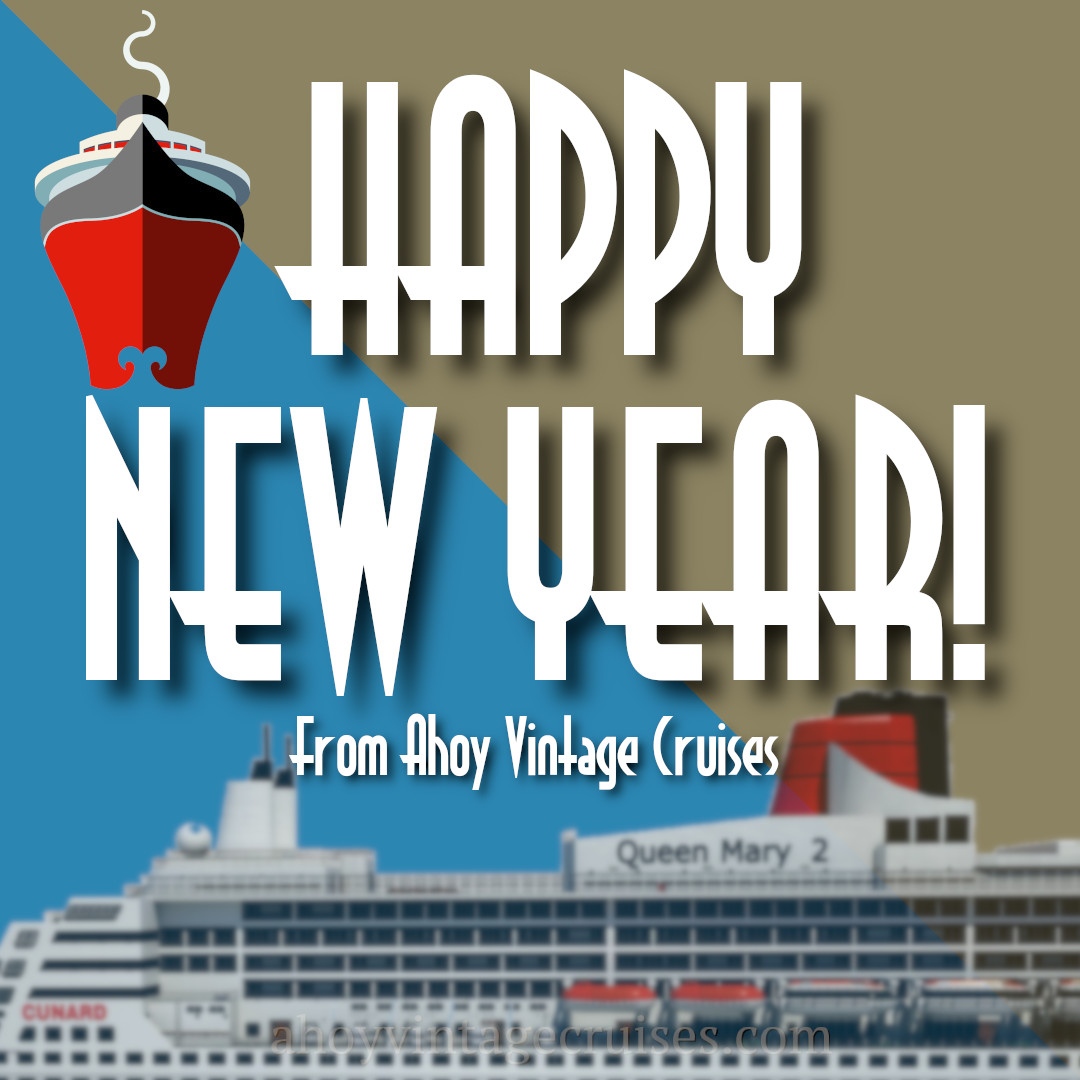 At long last, the incredible vintage voyages we’ve been planning are now truly just around the corner. We absolutely can’t wait! Not booked yet?

These starting prices are based on double occupancy for inside cabins. Tom would be happy to provide more details based on your travel preferences. He’ll help you with everything you need to have an incredible voyage!

Get in touch and Tom will be happy to answer all of your questions. Welcome aboard! 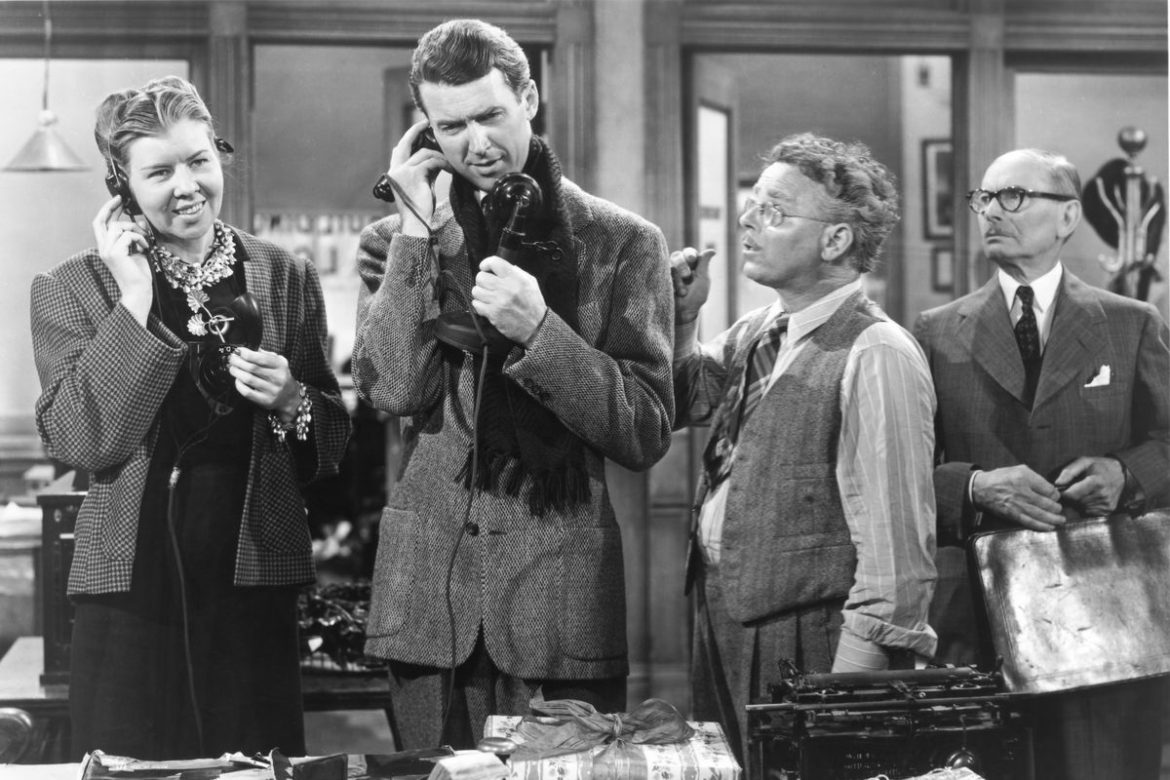 Tom is heading off on the Queen Mary 2 for his annual December crossing!

As a result, all bookings and enquiries should be made before Wednesday, December 8th at 5pm Eastern. Then he’ll be back in the office from December 22nd onward, except for Christmas Day.

Have a great voyage, Tom! 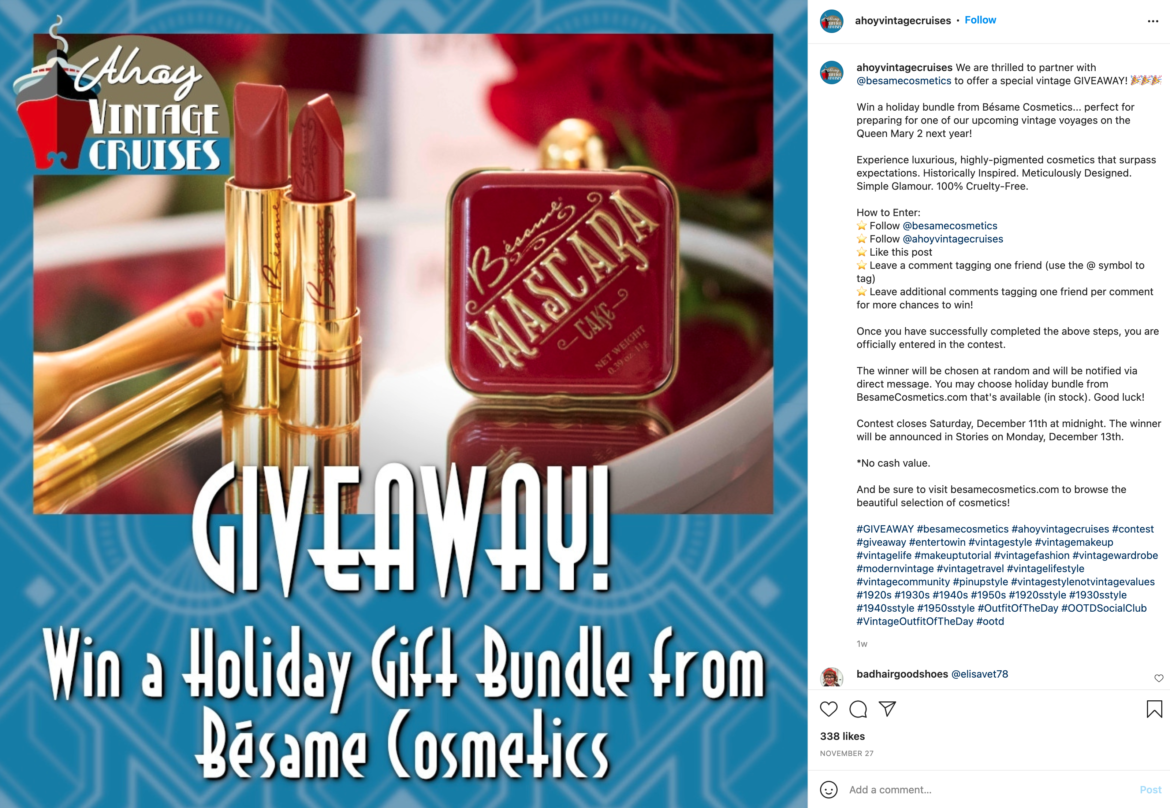 We’re currently running an Instagram giveaway partnered with Bésame Cosmetics! If you haven’t entered yet, head on over to the @ahoyvintagecruises Instagram account to enter to win! 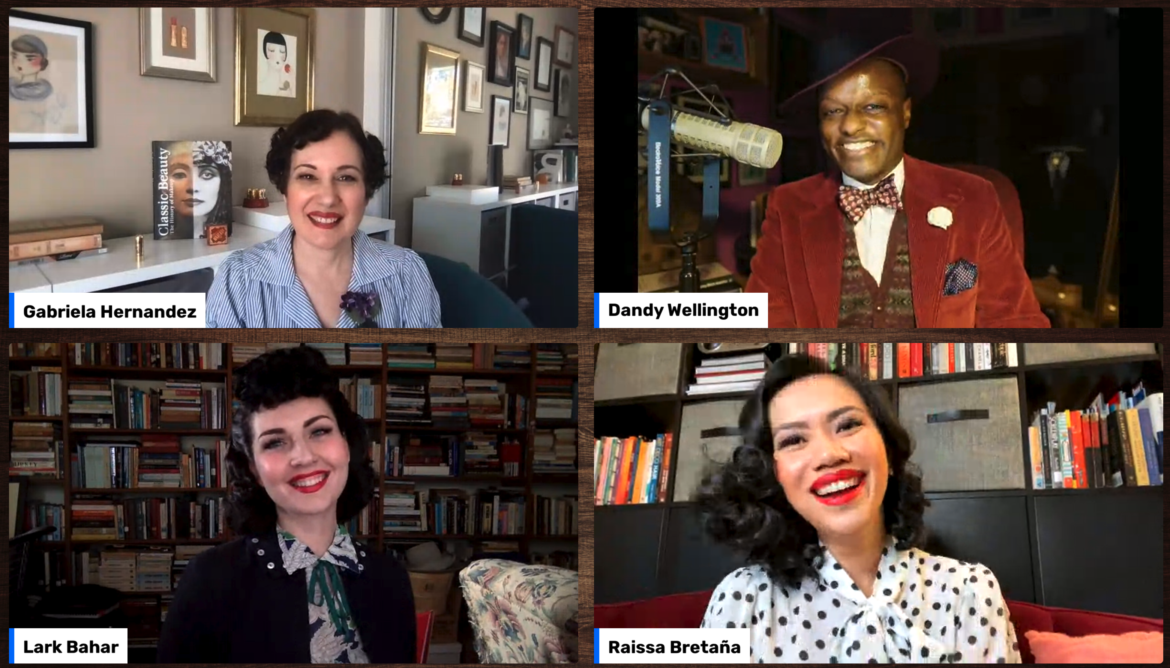 Thank you to everyone who joined us for our live event! Be sure to visit besamecosmetics.com to browse the stunning collection of vintage makeup!

In case you missed it, you can watch the replay here: 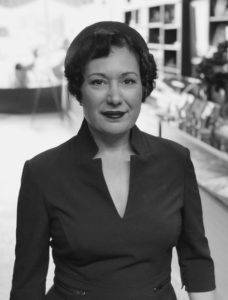 Bésame Cosmetics was created by artist, cosmetic historian, and designer Gabriela Hernandez after a life-long love affair with vintage beauty. At 12, Gabriela immigrated to the U.S. from Buenos Aires, always fascinated by her grandmother’s sophisticated beauty routine. She fully realized her passion for the creative arts and became a photographer, art director, and published author (Classic Beauty: The History of Makeup, Schiffer).

With her creative background, historical know-how, and cherished memories of her grandmother’s makeup, Gabriela finally developed the beauty brand of her dreams, filled with rich, historical details in wearable long-lasting formulas. She wanted Bésame to bring romance back into the makeup industry, allowing women to feel excited and passionate about their own beauty rituals again.

Keep an eye on our Instagram account (@ahoyvintagecruises) for an exciting giveaway from Bésame Cosmetics next week!

We are delighted to announce a special free virtual event taking place on Sunday, November 21st!

Tune in live for a 1930s makeup tutorial to prepare you for our vintage voyages and all your vintage outings. Bésame Cosmetics founder Gabriela Hernandez will take us through her expert 1930s makeup recommendations.

Not familiar with Bésame Cosmetics? You’re in for a real treat! This is a cosmetics line created from a life-long love affair with vintage beauty. Be sure to visit besamecosmetics.com to browse the stunning collection!

The event will be hosted by Dandy Wellington and perhaps a few more friends will drop in as well! It’s sure to be a terrific and educational free online experience. Don’t miss it!

Bésame Cosmetics was created by artist, cosmetic historian, and designer Gabriela Hernandez after a life-long love affair with vintage beauty. At 12, Gabriela immigrated to the U.S. from Buenos Aires, always fascinated by her grandmother’s sophisticated beauty routine. She fully realized her passion for the creative arts and became a photographer, art director, and published author (Classic Beauty: The History of Makeup, Schiffer).

With her creative background, historical know-how, and cherished memories of her grandmother’s makeup, Gabriela finally developed the beauty brand of her dreams, filled with rich, historical details in wearable long-lasting formulas. She wanted Bésame to bring romance back into the makeup industry, allowing women to feel excited and passionate about their own beauty rituals again.

RSVP and watch live to be entered to win a special draw!

We look forward to seeing you on Sunday, November 21st! 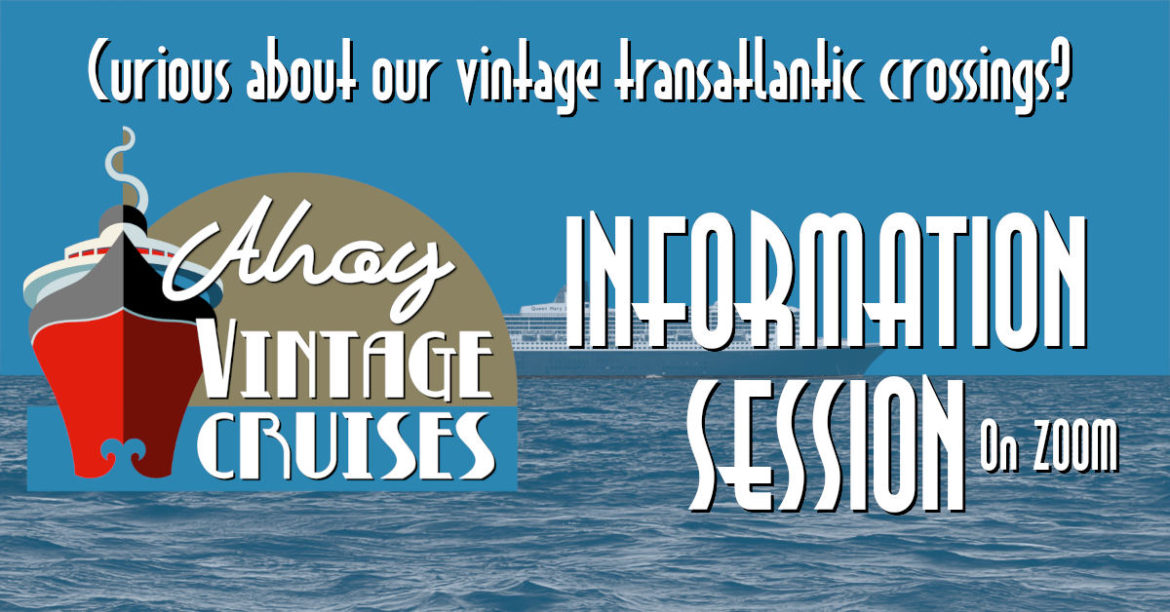 RSVP to our November Information session

Curious about our vintage crossings?

Join us for the next free Information Session over Zoom taking place on Sunday, November 7th. Here are some timezones as a reference: 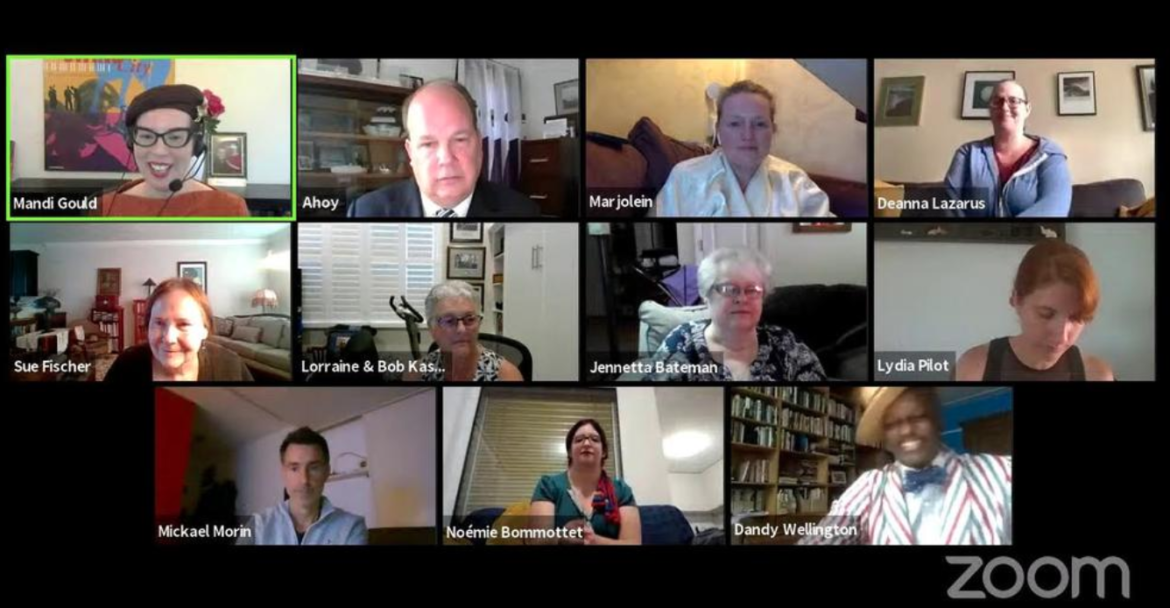 Replay of the September Information session

Yesterday we held an Information Session about next year’s crossings –

And we were even lucky enough to have Dandy Wellington join us live! It was a lot of fun, especially once we got rolling, and so great to put some faces to names.

Here is the recording –

We will hold our next Information Session the weekend of November 6th-7th. We have to confirm the day so if you’d like to join us, please mention in the form below if you have a preference!

RSVP to a Free Information Session

Are you curious about any of our vintage-themed transatlantic crossings taking place in 2022?

Questions? Just curious? Join us for an information session. 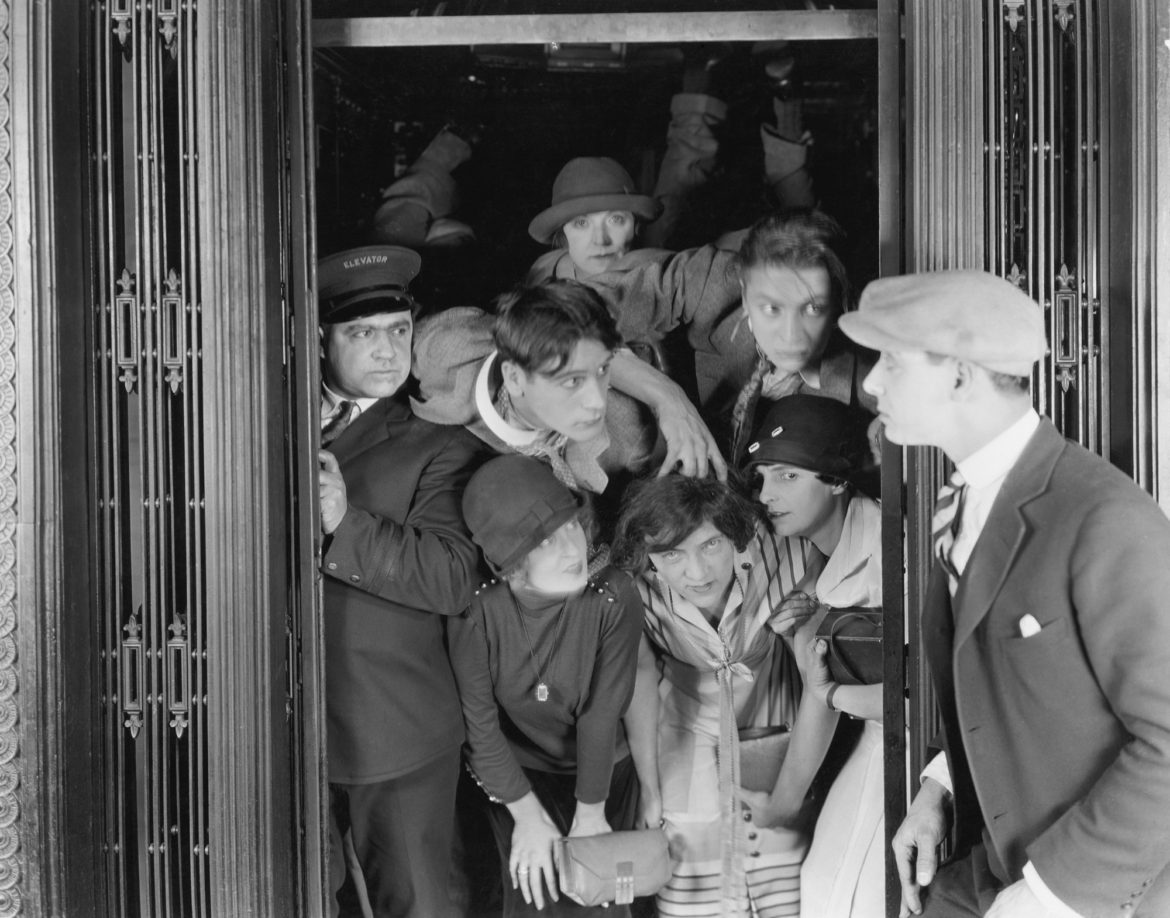 QM2 is filling up fast! 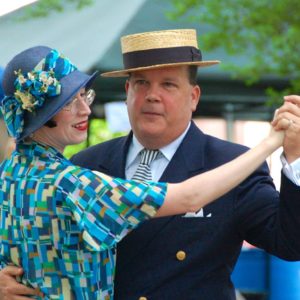 Tom here at Ahoy Vintage Cruises. Have you been thinking about your vacation plans for next year?

But not to fear!

I’m here to make planning your vintage dream vacation as smooth and easy as possible.

And with Cunard’s exceptional safety measures, not to mention 100% refundable deposit, there is absolutely no risk when you book a reservation on one of our exciting vintage-themed transatlantic crossings!

Our private vintage parties on the Queen Mary 2, booked exclusively through Ahoy, are sure to be a vacation you never forget!

***I’d like to stress that it is a good idea to book now, rather than waiting. Because of Covid there is a pent up demand for travel so the Queen Mary 2 is filling up fast.

Remember, the Queen Mary 2 is the world’s only ocean liner. It’s a very special ship and extremely popular with an incredibly loyal following of regulars.

So even if you aren’t quite sure, go ahead and put down a 100% refundable deposit anyways to reserve your cabin. If you change your mind, you can always release it, but once those preferred cabins have been snatched up, I would hate for you to be out of luck.

Each of our 2022 crossings will have its own distinct charm. Browse each of these pages to learn more about each unique week of events –

If you would like to book now or have any questions, I am always available for a chat at 214-761-1968 (Dallas Time) or shoot me a message via the contact form.

I look forward to hearing from you and do hope you can join us.

Bookings are exclusively through through Ahoy Vintage Cruises. Our intimate vintage parties and performances are private. Regular passengers on the ship will be turned away at the door so be sure to book directly with Tom here at Ahoy to avoid disappointment.

You’ve Been Waiting For This

This is the vacation you’ve been dreaming about.  After more than a year of everything cancelled — events, vacations, socializing, dancing, and fun in general — now is your chance to make up for all you’ve been missing. Our voyages are the trip of a lifetime!

Cunard is taking exceptional measures to plan ahead to fulfill their guests’ vacation dreams, with safety as their constant priority. Learn about Cunard’s impressive safety measures.

Designed by fellow vintage lovers just like you, our Transatlantic crossings on the luxurious Queen Mary 2 are the immersive experience you’ve been waiting for. We’re planning these events with love and care and can’t wait to set sail with you!

Schedule At a Glance

Throughout the day, enjoy the ship’s many amenities along with the option of informal vintage meetups. The main vintage events will usually take place from 6pm to 8pm in the Queen’s Room (a schedule will be provided for your crossing) followed by Cunard’s nighttime activities.

We use cookies on our website to give you the most relevant experience by remembering your preferences and repeat visits. By clicking “Accept”, you consent to the use of all the cookies.
Cookie settingsACCEPT
Manage consent

This website uses cookies to improve your experience while you navigate through the website. Out of these, the cookies that are categorized as necessary are stored on your browser as they are essential for the working of basic functionalities of the website. We also use third-party cookies that help us analyze and understand how you use this website. These cookies will be stored in your browser only with your consent. You also have the option to opt-out of these cookies. But opting out of some of these cookies may affect your browsing experience.
Necessary Always Enabled
Necessary cookies are absolutely essential for the website to function properly. These cookies ensure basic functionalities and security features of the website, anonymously.
Functional
Functional cookies help to perform certain functionalities like sharing the content of the website on social media platforms, collect feedbacks, and other third-party features.
Performance
Performance cookies are used to understand and analyze the key performance indexes of the website which helps in delivering a better user experience for the visitors.
Analytics
Analytical cookies are used to understand how visitors interact with the website. These cookies help provide information on metrics the number of visitors, bounce rate, traffic source, etc.
Advertisement
Advertisement cookies are used to provide visitors with relevant ads and marketing campaigns. These cookies track visitors across websites and collect information to provide customized ads.
Others
Other uncategorized cookies are those that are being analyzed and have not been classified into a category as yet.
SAVE & ACCEPT